Kid's and the things they say

Anyone that has kids, teaches kids, or is around kids, can tell you that sometimes they say the funniest, strangest and most hilarious things. I have two of these that I need to share for you all to enjoy.

Yesterday at church I had the great "opportunity" to substitute in Malorie's class(on the left in picutre). I even got to give the lesson. To go with the time of year, it was all about the birth of baby Jesus. I aksed the kids what three presents the Three Wise Men brought with them to give baby Jesus. Of course Malorie's hand shot up like a lightning bolt. I called on her and she proudly proclaimed "Gold, Myrrh, and FRANKENSTEIN." What the????? What a terrible gift to bring. I can't think of anything worse than bringing a MONSTER with you to the birth of the baby Jesus can you?
A couple of weeks ago my brother-in-law was doing some yard work. He cut a branch down that fell right on his face. His nose swelled up huge. Coltin (in the middle in the picture) and I went to go check on him. After seeing him, on the drive back home, I turned to Coltin and said:
"Isn't it sad that Tony probably broke his nose?"
Coltin responded: "How can someone break their nose? There aren't even bones in there. Isn't it all just a bunch of CLEAVAGE???????"
I almost died laughing. I had to pull over and get my inhaler out of the glovebox! I almost had to give it to Coltin as well after I explained to him that he really meant Cartilage!!

Gotta love it! Tell us all something funny a child has said to you recently.

My 5 y.o. nephew will leave you howling with laughter when you talk to him! Case in point...I was talking to him on Dec. 23rd and asked him if he knew what "tomorrow" is. He promptly replied, "What? It's Christmas Eve, I know that Aunt Angie and my mom didn't tell me that....I'm smart because I'm 5 now!" I giggled and said that he was right on both counts...it is Christmas Eve and he IS smart, but that wasn't what I was talking about. I reminded him that we would all be going to "Grandma & Grandpa's" house to be together. We chatted and he told me that his mom made everyone a gift (then "put me on hold" while he checked to make sure she made me one so he could tell me she did!). I told him that I had a gift for his sister, his mom & dad and even one for him. He promptly asked what I got him and when I told him that I wouldn't tell him because then it wouldn't be a surprise he replied, "You can tell me what it is! I'm talking to you on the phone and I can't hear a thing you say!!" I almost wet my pants laughing at that one and my sister-in-law later told me that he had the phone pressed to his ear so hard she thought he was going to cause damage! LOL!!

BWWAAAAHHHH!! That is too funny man! Those kiddos of yours get cuter by the minute!

Jaron! How are you! Two things. . . My primary class said that the day before christmas eve is christmas adam, and also I saw your cute family at the end of november at the airport. I guess we had missionaries come home the same day! I hope life is well for you and your beautiful family. Happy Holidays!

An oldie, but goodie, my son (about 3 then) used to wear his Batman mask wherever he went (sometimes the cape too). One day he wore it on our errands and each place we went someone always said, "Hi Batman!" So after one of these greetings he turned to me and asked (completely serious), "Why is everyone always so happy to see Batman?!"
--Megan Z Harris, NY

oh my gosh, kids crack me up! My daughter started kindergarten this year and she was telling me something (can't remember what) but I was impressed with whatever it was and I said "wow, you've gotten so smart, how did you get so smart?" She said, "yea, I know, kindergarten makes you smart".
Ain't that the truth!

Okay, that was the funniest thing I have heard in a long time. I laughed until I cried!!!

I used to babysit 2 boys from my church. One day I was reading them the story of Jesus death and resurrection from a childrens' Bible when Z (5 @ the time) stopped me for a question (always encouraged). "How can Jesus be older than me?" "What?...This story happened a long time ago when Jesus was 33." "Yeah, but how is he older than me?" "What do you mean?" "Well," Z said, "mom's b-day is Feb, J's (brother, age 7) is Aug and mine is Sept...but Jesus' is in December. So how can he be older than me?" I about died laughing!! Especially when I explained that my birthday is also in December and I'm older than his mom!! Kids can be so literal.

Oh, you are killing me with those funny stories! I don't have children of my own, but there's a reason why they are the main subject in most scrapbooks! Hilarious!

Adults say funny things, too. Just ask my coworkers, who laughed their butts off last year at the office golf tournament when I told them I had hit the ball on the green with a Wood 12... (Yup, that story did make the scrapbook cut.) Fun times.

Well I have two funny ones for you..
My 3 yr. old son one morning was in the kitchen while I was cooking.. well his cousin had sent him a picture for Easter with bunnies and dotted lines for the path. My son started tracing the lines with a black marker. I told him, "Caidan you are messing up Kainoas picture." He said, "Mommy, but its not Kainoas picture anymore because he gave it to me!" I lost that battle.. #2 I was telling my sister in law about that story since her daughter is the same age as my son and she told me a funny one as well.. she had been carrying her newborn alot because he had a cold and she was telling her mom, "Oma my forearms are sore from carrying Maika already.. her daughter butt in and said, "Mommy you don't have four arms.. you only have two!" Cute and funny! Have a great day! 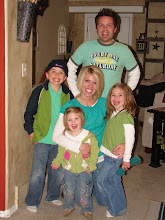 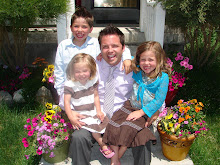